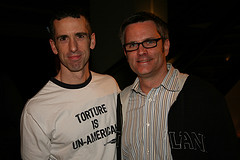 The Portland Smirkury has a love affair with their favorite militant gay, Dan Savage. Savage is a writer of some repute with the leather chaps and pink boa crowd. His syndicated “Savage Love” weekly column dishes sex advice to the gay and lovelorn. The national new media is beginning to notice.

Savage is vile, in your face and disgusting. But the paper prints his stuff anyway, thinking Dan Savage brings their alt weekly a little street cred. Besides, his commentary is the yin to the paper’s classified ad yang.

When then-Commissioner Sam Adams asked the Seattle based Dan Savage for an endorsement for Mayor in 2008, Savage told Willamette Week,

“Sam?” Savage said, when asked why he was endorsing Adams. “He’s a pole smoker like me. I’m like those old women voting for Hillary.” 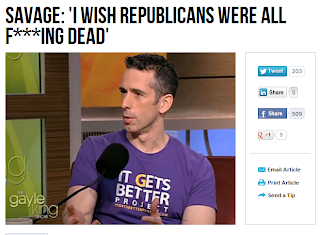 Savage had tweeted that GOProud, the conservative gay organization’s endorsement of Mitt Romney was wandering a little too far off the ideological plantation for his taste:

GOProud sent Savage their own message which you can find here.

Savage was also quoted in the Breitbart story as saying:

In 2006, Savage said that Green Party Senate candidate Carl Romanelli, who was running against Democrat Bob Casey (the eventual winner), “should be dragged behind a pickup truck until there’s nothing left but the rope.” Casey was so offended he refused Savage’s campaign donations.

It appears The Smirk can dish it out but can’t take it. Recently 5th Listener “Andy from Beaverton” decided to use one of Savage’s own lines in his comment on one of Savage’s stories.

The paper censored it.

From: Andy from Beaverton
To: Victoria
Sent: Thursday, June 21, 2012 6:31 PM
Subject: I DID IT! I finally had a comment removed at the sMercury

I finally wrote something so offensive, they removed it.  So I just posted it once again.  What did I write?  I just posted a quote by Dan Savage to a Dan Savage article;  Savage “should be dragged behind a pickup truck until there’s nothing left but the rope”

“SL Letter of the Day: Do Monogamous Gay Couples Exist?”

Let’s count the minutes until they remove it.  Don’t they know it’s a Dan Savage quote?

Andy asked in a comment why he was censored when he was only quoting Savage. It produced this reply:

After some discussion among Merc editors, Andy, we decided that, lacking any context, suggesting that Savage be “dragged behind a pickup truck until there’s nothing left but the rope” was just plain threatening, whether or not it was a quote.

Then he asked for clarification but got none:

So disgusting and vile Savage can say anything in the Smirk, but if anyone quotes him that’s threatening. Please make a note of it and perhaps send a reminder to the Smirk that perhaps they should reconsider putting such a threatening columnist in the pages of their own paper.