By Pete the Banker: The Congress and more specifically, Socialist Bernie Sanders of Vermont pushes Government restrictions aimed to break up Corporations before they become too big too fail. Given that this is hypocrisy since Sanders rushed to rescue both Fannie, Freddie at cost of Billions to taxpayers last year.  What is his real motivation? 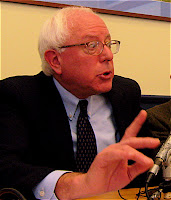 Only one large corporation today existed in 1900.  The capitalist system works and absent outside intervention companies thrive and then fail, to be replaced by others (Joseph A. Schumpeter; “Creative Destruction”).  It is interesting that the history of large corporations is that many are spawned by big government.  During WWII corporations like GM and Dow Chemical saw their greatest growth as contractors to the Federal Government.
During the past year, thanks largely due to the Federal Reserve, the Treasury, and Congress, three banks— JP Morgan, B of A, and Wells Fargo have similarly grown dramatically now accounting for nearly 1/3 rd of the industry deposits (2yrs ago 20%).
More recently, we have seen that first hand results of government intervention in the Bank of America takeover of Merrill Lynch, the purchase of Merrill being done at $29/share far in excess of the price at which it should have been consummated.  Ken Lewis completed the purchase despite having second thoughts about it due primarily to coercion from Paulson and perhaps Bernanke to finalize the deal to the detriment of B of A’s shareholders.  Ultimately, the decision cost Lewis his job.
JPMorgan, Goldman Sachs, and Morgan Stanley were among 9 banks that were persuaded in mid-October 2008 by then Treasury Secretary Henry Paulson to accept TARP funds of $125 billion of capital injections with avowed intention to help restore stability to the financial markets. The three at various times stated they did not need the funds.  So why were the funds advanced to them?  Seemingly reluctant initially, the government eventually allowed them to payback the TARP funds within a few months.