We’ve already begun to see how the ‘death panel/rationing’ will be used against us. Bureaucrats are already making decisions on cost and it will only grow worse and intensify under Congressman Blumenauer’s ‘end of life’ discussion language he’s put back into the ObamaCare. The fact he tried to keep it on the QT reveals he knows how unpopular this is AND that there’s something to hide.
In his piece today in the WSJ (here), Attorney David Rivkin and a co author discuss how the rationing of health care will take place.
They look no further than the rationing of the anti cancer drug Avastin:

Ponder the FDA’s justification—there wasn’t “sufficient” benefit in relation to Avastin’s risks. Sufficient according to whom? For your wife, mother or daughter with terminal breast cancer, how much is an additional month of good-quality life worth? And what costs should be weighed? Like all drugs, Avastin has side effects including bleeding and high blood pressure. But isn’t the real cost to these women a swifter, less dignified death? The FDA made a crude cost calculation; as everyone in Washington knows, it wouldn’t have banned Avastin if the drug cost only $1,000 a year, instead of $90,000.
The Avastin story is emblematic of the government’s broader agenda to ration care based on cost and politics. Once ObamaCare comes into full force, such rationing will be pervasive. When the government sees insufficient benefit, all but the wealthiest and most politically connected will have to go without.
Think it can’t happen here? Think again. The 2009 stimulus bill spent $1.1 billion to research “comparative effectiveness.” That’s the same approach used by Britain’s National Health Service to ration care, weighing cost against factors such as the ever-elusive concept of quality of life. 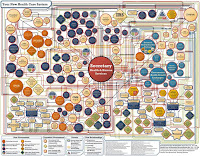 Rivkin, who’s been a guest on the program several times, is arguing against ObamaCare on behalf of 20+ states in Florida. While those lawsuits invoke undue burden on states, costs and the individual mandate, Rivkin has another theory which he explores again in this piece. It goes something like this: You have individual liberty and the liberty to be secure in your person with (according to Roe v Wade) an implicit right to bodily privacy. Is your right less because the government wants to save money (on an insurance policy it forced you to buy)?

This whole scheme doesn’t stand up to legal scrutiny. Government-imposed cost-benefit rationing raises serious constitutional concerns. Individual bodily autonomy is one of the oldest recognized rights. Its constitutional significance is reflected in Supreme Court decisions acknowledging the rights to refuse unwanted treatment and to access treatments such as contraception and abortion. Freedom to make medical decisions is central to the autonomy and dignity encapsulated by the majestic word “liberty” in the Constitution’s due process clauses.

And finally on ‘death panels’ making a comeback because of  Earl Kevorkian Blumenauer getting them reinserted into the regulations:

The administration has resurrected that provision through regulations, and Medicare will now pay for such counseling as part of elderly “wellness assessments.” Yes, the “death panels” charge is somewhat crude, but combine cost-based rationing with end-of-life counseling and, well, here we are.

Well, here we are, indeed.