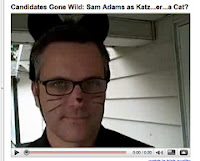 It is obvious that David Wu has betrayed the public trust, and disgraced himself individually and as a member of Congress, by his latest sexual assault, this time on an18-year-old campaign aide, the daughter of a Democrat donor. He should, therefore, resign immediately, and not narcissistically purport to determine national policy as a Member of the House of Representatives. Or, in his case,  the House of Reprehensibles.

However, I believe it is also true that Portland Mayor Sam Adams,  a homosexual predator who stealthily seduced a 17-year-old intern, Beau Breedlove in the aptly named Beaulita Affair, should be held to the same standard by citizens and do the right thing by resigning.  Adams lied repeatedly about his affair with Breedlove in order to get elected, vilifying his opponent and all others as  “homophobes” for raising questions about his then-rumored affair with the minor male. Adams admitted the affair, including among other things, that he engaged in a romantic tongue-swapping “French kiss” with Breedlove in the charming circumstances of the City Hall Men’s Room.
Further, Adams admitted that he had consummated the relationship with Breedlove in a homosexual manner, the details of which need not be specified, but Adams attempted to excuse and justify this misconduct in office by insisting he had waited (apparently with baited breath) for Breedlove to turn 18 before doing the deed, which would otherwise be statutory rape.
At the time, Breedlove did not cooperate with investigators from the Office of the Attorney General and Adams escaped prosecution.  Later, however, Breedlove claimed that Adams had asked him to lie about the affair. Breedlove also filed a civil action.
So, is there one standard, or two? One for heterosexual misconduct in office, and another for homosexuals like Sam Adams.  Would Adams still be in office, with no effective condemnation by his Democrat Party, if Beau Breedlove had been a 17-year-old girl instead of minor male who was the object of Mayor Sam’s lust?
There ought to be one standard of “zero tolerance” for sexual misconduct in office for those who seek and hold public office and then betray the public trust. Under that one standard, David Wu should put on his I’m-A-Tiger uniform, and resign immediately. Under that standard, so should Portland Mayor Sam Adams,  resign from the office he has dishonored by his homosexual seduction of a male minor, and his dishonesty pertaining to the homosexual predation.   In short, homosexual sexual misconduct should be no more tolerable than heterosexual sexual misconduct. Period.
Tell ’em where you saw it. Http://www.victoriataft.com