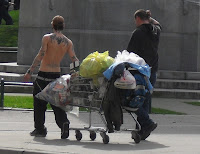 Portland Mayor Sam Adams says his EMERGENCY! “Plastic” Bag Ban will mean that some people will be inconvenienced such as old people, homeless people and handicapped people who use “plastic” bags because they’re lighter, more malleable and hold more stuff than paper or reusable bags.

His solution to their inconvenience? GOVERNMENT SHOPPING BAGS. Hear it here!

Mayor Sam Adams says the City of Portland will send these people government issued bags “for free.” He says they’ve been doing it for ten years.