While regional planners plan their plans to plan our lives, a new survey shows that when you talk to the people and look at the rubrics of their lives–home, gas money, inflation–they’re quite miserable. In fact, according to the Wall Street Journal, we’re third on the misery index, a term first heard during the Jimmy Carter presidency.

How miserable are consumers now? A 1980s index would total 11.0%, but recent inflation reports haven’t totally captured the pain drivers are suffering at the pump. Plus, any measure today would have to include the weakness in real estate. The January S&P/Case-Shiller report showed the fall in home prices is accelerating again. Declining home values make homeowners feel especially miserable.

The national number, of course, masks the divergence across regions since some cities and real estate markets are recovering faster than others. Local misery indexes are possible using city unemployment rates from the Labor Department, local gas prices from gasbuddy.com, and home prices from the S&P report. 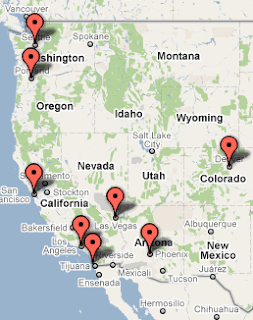 Ronald Reagan famously said, “the more the plans fail, the more the planners plan.” In the Portland area, planning became all important even though we couldn’t afford the planners’ utopia.  A quarter billion dollars for a mile of light rail to a place where the public doesn’t even want it omewhere along the way the people and what they can afford are all but forgotten.  Even Oregonian columnist Anna Griffin knows how dire things are and expressed it nicely in a column Wednesday about the foolishness of boarding the fiscal crazy train between LO and PDX,

Maybe because the recession revealed a major blind spot in our smart-growth strategy: Making stuff look good, making neighborhoods more livable, does not automatically translate into job creation. If you need proof that urban renewal isn’t enough, stay aboard the streetcar as it winds down to South Waterfront, where high-priced condos have been downgraded to affordable apartments and promised high-tech jobs haven’t materialized.
Creating lasting employment opportunities should be the priority of every government branch for the foreseeable future. The fact that so many elected officials are so determined to push ahead with a Lake O streetcar now shows that it is not.