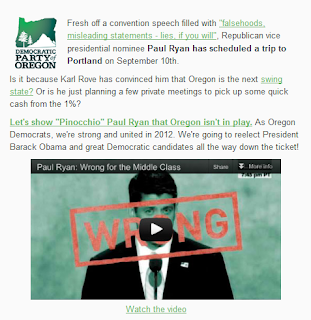 This hysterical message today from the Democrat Party! Republican Wunderkind Paul Ryan is coming to Portland! Maybe they know something we do not. It has not been confirmed yet.

Democrats must be concerned. They’ve sent out a central planning video outlining Ryan’s “lies” in his speech which, as many reporters have pointed out, aren’t lies at all. Not even close.

As Guy P Benson points out in his TownHall.com column:

To the surprise of no one, the ad’s “rebuttals” are misleading and wrong themselves.  Point by point:

(1) They begin with video of CNN reporters discussing accusations of Ryan’s “lies.” This is proof that the Obama campaign sent out a lot of angry emails, and nothing else.

(2) Medicare – Sorry, guys, but it is 100 percent true that Obamacare raided $716 Billion from Medicare to pay for itself. … He has admitted this on camera:

(3) The GM Plant – Part of the factory Ryan mentioned was shut down under Bush, despite the initial GM bailout (which Senator Obama supported).  The plant finally fully closed in April of 2009, during Obama’s presidency, as this report clearly states.

(5) The debt commission – What Ryan said is absolutely correct.  The Obama ad quotes Chris Wallace, who notes that Ryan was on that commission and voted against it.  True.  He refused to abide the section maintaining Obamacare, and voted no on its final findings.  Still, he was intimately involved in the group’s deliberations and proposed solutions.  Not fully happy with the final outcome, he went on to craft two budgets of his own, with numerous elements based on the Simpson-Bowles framework.  The commission’s Democratic co-chairman (Bowles of Simpson-Bowles) has praised Ryan’s proposals to the hilt.