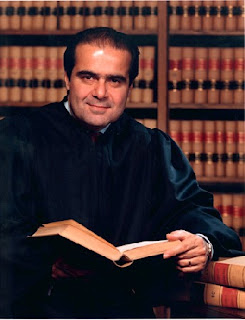 This story was ballyhooed by Congressional Quarterly via Twitter this afternoon. It claimed (erroneously) that Scalia said he wouldn’t have voted in favor of Brown v Board of Education. CQ and the newspaper reporting this were wrong according to video (here —ee it around 23:45).
And it was wrong as you can see here on the video.
CQ has NOT changed its incorrect headline on the story.
American Spectator and the Weekly Standard have pounced OUT LOUD so this fabricated “quote” by Scalia quote doesn’t end up in his phony wiki page ala Rush Limbaugh.
Here’s the guy who helped set the record straight.
Back in the day I got Plessey v Ferguson and Brown v Board of Ed decisions confused on a constitutional law midterm undertaken with a minimum of sleep. Boy did I feel stupid. I actually went to my professor and told him I was embarrassed by the mistake and that I would take my medicine (it obviously brought down my score), but needed him to know I knew I messed it up. I aced the next final.
l