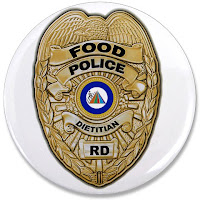 A decade ago it would have seemed absurd that a child could be taken from a parent because he weighed too much, but according to a story in today’s Portland Tribune by Peter Korn (here), that’s exactly what has happened in Portland. And, he warns, it’s likely to occur even more in the future. This is because a recent Journal of the American Medical Association commentary has called for more doctors to do just that.
The thesis of Korn’s piece is that the “obesity wars” are coming to Portland. Readers of this blog already know the war’s been waged here for quite some time (more on that later), but it takes a kid being taken from his father to go mainstream, apparently.
The story begins with a disabled man whose son is 400 lbs and eleven years old. That’s horrible, of course, but the obesity doctor treating the child eventually turned dad in because he took the kid to McDonalds too much.

‘Scuse me? Could you rewind or read that back to me? That’s right: the eleven year old morbidly obese kid was taken from Dad because he took him to Mickey D’s too much. That was the last straw for Dr. Daniel Marks, an OSHU obesity expert:

The boy’s father was bedridden and said providing the fast-food burger meals they were eating three times a day was one of the few ways he could make his child happy.

The diet continued. So Marks began proceedings that resulted in the boy being placed in foster care.
“It was an intractable social situation,” Marks says. 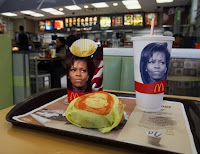 The kid was in a bad way, of course. He had adult onset diabetes and barely moved his tush off the couch,  but his bedridden dad got him McDonalds because it made the kid happy. Interestingly enough, the father was getting the child medical help for the problem. He was doing some due diligence but when Dad didn’t do what the doctor ordered the doc turned him in.
If you can turn in a parent for a 400lb child can you turn one in whose child is 300 lbs? 200? Twenty five pounds over weight? If the state can insinuate itself in one circumstance doesn’t that leave room to involve itself in all others?
Big fat kids make bad law. It won’t matter to the Oppressives in Portland. They’ll tut tut and continue with their plans to DO something. The parents who do the right thing will be under the same watchful eye as those who don’t. The example of one big fat kid will change the tone for all the normally sized ones. One disabled and enabling parent will be the poster child of bad parenting. Laws will be passed. Ordinances drawn up. Plans rushed through.
The statists will continue to shake their reproving forefingers at us and admonish us to do what they say because,
1. They know better than we do
2. If you don’t, they’ll take your kid away
3. We’ll use your tax dollars to do what we want anyway
And indeed the process has begun. Lawmakers have passed laws requiring calorie postings on menus. Building drive through fast food places is becoming more and more difficult. Elected officials actually cheered when a Burger King restaurant was razed to make room for government subsidized health clinic.
And Multnomah County has drawn up its “Food Action Plan” which I highlighted in several blog pieces here, here, here, here, and here and on the program late last year (links to the interviews are on the blog posts). Here’s the overview of the plan from one of my posts:

It calls for the county to direct how people receive food in so called “food hubs,” assigns the county the duty to ” reduce unhealthy food availability [think McDonalds lawsuits],” reduce property rights with its plan to “establish an agricultural land trust,” “increase acceptance” and “promote enrollment” of the food stamp program (SNAP), make it “easier” to eat more healthfully–by diktat–of course. In short, it would put government in charge of what you access you have to food. And the plan makes a foray into housing calling for the county to “create sustainable living conditions.”

And it’s all done in the name of ‘social justice.’

Multnomah County, like much of the country, is at a critical juncture in fixing its food system. Currently, we have a two-track food system: those who can afford it have access to sustainable, locally grown, healthful foods, while the poor have few healthful food options in their communities, and even fewer economic resources to purchase such foods. Hunger, food insecurity, and health disparities result from a system that perpetuates economic inequality and social injustice. The scales must be rebalanced.

There are some things that I like in the food plan such as production of food for the poor and a seed library to share seeds. But they’re only effective if free people can decide to involve themselves in such programs.
“Empowering,” “funding,” “creating,” “fund opportunities for,” “increasing opportunities for,” “develop incentives,” mean we’re going to pay for this “new” plan to take over the marketplace.

As I wrote last year, the program also involves the so called “Food Corps.” We’re loosing gardening and healthy food “volunteers” (paid by our tax dollars of course) on schools. These experts are unemployed recent college grads who have spent the last four years subsisting on ramen noodles and jello shots.
I sure hope they can slip in some algebra and chemistry while teaching composting technique in the schools. On the bright side, however, maybe they can actually GROW the bananas the kids will be required to put the condom on! Hey, I’m a cup-half-full kind of gal!
In a sidebar to the story about the child being taken from his father, The Tribune highlights the Food Corps (here). Here’s the money quote:

Michelle Ratcliffe, farm-to-school program manager for the Oregon Department of Agriculture, describes the advent of Food Corps as “huge” for the field. It will combine some of the national stars in research and activism in the growing movement, and link them in mutual support, says Ratcliffe, the program’s liaison to Oregon.

Apparently “activism” is what it’s all about.
The head of the Food Corps program told me on the show last year that being a Food Corps member was like being a member of the military. Charming.
Recently another blogger who’d seen my postings on the Food Plan decided to do a post herself. She was called on the carpet about some of her observations by the so called Politi”fact” reporter. (That’s right, when they can break themselves away from Politi”facting” tweets (I’m not joking), they Politi”fact” blog posts.)
The reporter said the blogger’s arguments couldn’t be concrete or accurate because the Food Plan was too “aspirational” and “fuzzy” and no one knew how it would manifest itself in public policy.
As usual, the Politi “fact” reporter was all wrong.
Last week when the Rainbow City Council decided to ban “plastic” bags, Portland Mayor Sam Adams pointed to passage a couple of years ago of their Global Warming plan as the basis for the ban. This too was a plan that was aspirational and fuzzy.

The problem with these plans is their “want-to’s” have a funny way of becoming “have-to’s.”