Occupy Portland has made no effort to conceal its hatred of Israel and embrace of the Islamism. We showed you photos of anti Israel signs at the Occupy Portland encampment’s “sacred place.”

Jew hatred in the church at Occupy.

Today’s gathering to “celebrate” the year anniversary of Occupy Portland (“Occupy Portland Not Afghanistan”) was another example of indulging the hatred toward the West and its values.

Saba Ahmed, a woman who once booted out a Tea Party photographer at Portland State University’s “open” meeting about Islam, was a featured speaker. The member of the Islamic Center of Greater Portland was asked to speak the wars by the west against Jihadists: 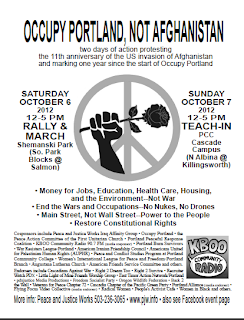 SABA AHMED
serves as the Co-Chair for Interfaith Council of Greater Portland is a member of Islamic Society of Greater Portland (ISGP). Saba has been lobbying against the wars in Washington DC for the last few years at the Senate and House Armed Services, Foreign Relations and Homeland Security Committees. She serves on various Afghanistan Policy workgroups and think-tanks. Saba holds her Juris Doctorate, MBA and Electrical Engineering degrees. While she strongly opposes all wars, she looks forward to keeping deployed troops safe through Islamic culture and sensitivity Trainings.

Yes, if we would just acquiesce to murderous rampaging jihadists we’d have peace in the world.

Andy Mc Carthy, whom you’ve heard countless times on my program, has written a book about this nexus of the left and Islamism called, “The Grand Jihad: How Islam and the Left Sabotage America.” The title of the book comes from a memo uncovered in the notorious Holy Land Foundation trial written by a Qatar Islamic teacher:

The Ikhwan [Muslim Brotherhood] must understand that their work in America is a kind of grand jihad in eliminating and destroying the Western civilization from within and “sabotaging” its miserable house by their hands and by the hands of the believers so that it is eliminated  and God’s religion is made victorious over all other religions.

The man who wrote that is a board member of the organization responsible for bringing the anti Israeli pro Palestinian rap group to PSU and Lincoln High School and which underwrites the Muslim Organization at PSU and Arabic language classes at Lincoln.

For the record, the Islamic Society of Great Portland is an offshoot of the Islamist Society of North America which, like the Muslim Student Association and CAIR, are offshoots of the Muslim Brotherhood. This connection has been proved in court in the Holy Land Foundation Trial and are part of The Grand Jihad.