Portland Occupiers and their kindred in communist, unionist, anti war and  Portland State University faculty circles (but I repeat myself) promise violence and theft on May Day. They’re also doing it under a new name. This week they’re calling themselves the Portland Liberation Organizing Council or PLOC for short. 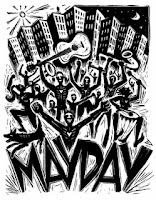 PLOC’s planned melee begins in the morning at the Portland Public school HQ where students will stage a strike. This is otherwise known as skipping school.

PLOC-ers are upset about budget cuts at schools– –and world peace. Perhaps they’ll ask the Superintendent about giving money away in the City’s latest urban renewal scheme (see post here) which will cost the school district $163 million dollars, but don’t count on it. That would ruin the ‘1%-ers are evil and greedy and that’s why school budgets are being cut back’ narrative.

I know what you’re thinking: Will the kids get community service credit for skipping school? We’ll be asking on the program today. 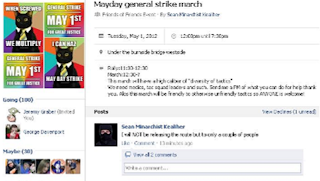 Meantime, back at the “adult” protest, there will be rallies, marches, guitar strumming, mayhem, property theft and drum banging (rinse, repeat) conducted throughout the day. The group claims to actually have a permit for one of their marches but an un-permitted march is planned where organizers have called for violence.

They not only say that on their organizing page but also on their Facebook page. Gee, I wonder what that means? Sounds like threatened violence to me.

PLOC-ers also plan to steal property. They call this “Land Liberation” and “Space Reclamation,” but those are just fancy words for taking someone else’s property. They’ll be doing this activity at Woodlawn Park at NE 13th and Dekum.

At the same time the PLOCK-ers are inviting violence and other law breaking, they’ve also asked the Mayor to stand down and keep the cops out of their way.
Knowing this Mayor, he probably will do what they want.

Stay tuned to the Victoria Taft Show. We’ll be covering the May Day Melee from an, ah, interesting perspective. You wouldn’t want to miss it now, would ya?