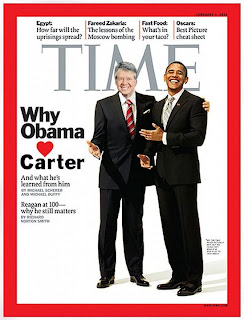 H/T to Tyler Shaw for the cover

The Time magazine cover with Barack Obama and Ronald Reagan is about as far off the mark as one could get. Obama’s presidency has began looking more and more like that of Jimmy Carter, with ineptness and indecision and now, with a major ally teetering on the brink of collapse and into the hands of radical Jihadists, the Muslim Brotherhood.

Much like when Carter refused to support the Shah of Iran, encouraging him to step aside and allow the the Ayatollah Khomeni to impose his strict Sharia over Iran, Obama and members of his administration are encouraging a Peaceful and orderly transition.

Forgotten is that once the Shah of Iran was gone and Khomeni took over, he “ruthlessly purged the disorganized liberal oppositionists and consolidated his brutal dictatorship, the excesses of which were far worse than anything perpetrated by the Shah.”

As an editorial in the Washington Times puts it, “Islamic extremists are giddy over the possibility of the region’s largest pro-American domino falling. Liberal oppositionists are calling for a united front government with the Muslim Brotherhood, a compromise measure that will surely prove fatal when the current regime collapses and the moderates are left to face off with the extremists. Given the precedent set in Iran – as well as in the Russian and French Revolutions – the liberals will not last long.”

A recommendation they make to Obama and I agree with, “The administration should immediately draw down the number of personnel in the U.S. embassy in Cairo. A hostage crisis may be the only part of this Carteresque rerun Mr. Obama can avoid.”

Closer to home, about a hundred people gathered in  downtown Portland Saturday to rally in support of the Egyptian people against Hosni Mubarak. While  I have no affinity towards Mubarak and think his ways should have changed long ago, I also wonder if these people in Portland fully understand just exactly what they are rallying in support of? KGW.com

Will Egypt go the way of Iran?