H/T Rees Lloyd
(pictured: The Vietnam War Memorial in DC and below the replica of The Wall visiting Portland in 2007) 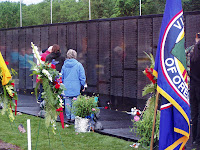 American Minute with Bill Federer
November 13
The Vietnam War Memorial was dedicated NOVEMBER 13, 1982, honoring 58,000 American troops who died.
U.S. forces inflicted over a million enemy fatalities, yet politicians did not allow a victory.
A former Communist North Vietnamese colonel, Bui Tin, called the American “peace movement” essential:
“Every day our leadership would listen to the world news over the radio to follow the growth of the American anti-war movement. 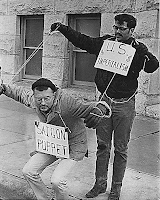 Visits to Hanoi by people like Jane Fonda and former Attorney General Ramsey Clark gave us confidence that we should hold on in the face of battlefield reverses.”
On October 12, 1967, during Operation Medina, Marine Sergeant George Hutchings of Charlie Company, 1st Battalion, 1st Marine Division, had a dozen men killed around him when ambushed by North Vietnamese in the Hai Lang jungle.
Months later, after numerous battles, George was shot three times, bayoneted and left for dead.
He survived and was later awarded the Purple Heart.
Of the Vietnam Memorial, George Hutchings said:
“On that wall is the name of Corporal Quinton Bice, who was hit in the chest with a rocket running a patrol in my place.
A Christian, he had shared the Gospel with me, but I didn’t understand it till he gave his life in my place.”
Tell ’em where you saw it. Http://www.victoriataft.com