Rees Lloyd, with his thoughts on Columbus Day, America’s Heritage, Portland schools and the lessons we can take from them all: 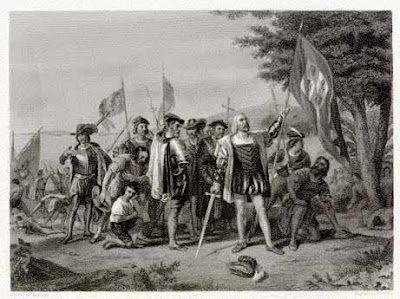 can tradition observed annually on October 12, may soon disappear under the culturally transformative presidency of Barack Obama, in which American traditions, and values, are, indeed, being transformed in what is being called the “Age of Obama.” That transformative change from the values of the Founding Fathers to the values of Obama is perhaps reflected by the fact that on Oct. 12, 2009, as “Columbus Day” went unobserved or unexplained in Portland schools, California established by law the observance of “Harvey Milk Day” in California schools in honor of Milk, who became a homosexual martyr when he was shot to death, although the killer was not some alleged “rightwing” or “religious” or “homophobic” fanatic, but, rather, was a colleague of Milk’s on the San Francisco County Board of Supervisors who infamously claimed that an overdose of “Twinkies” made him do it. Columbus Day this October 12, 2009, in contrast to California’s new Harvey Milk Day in the transformed American culture, came under escalated attack by liberal and leftists bearing allegiance to political-correctness, cultural relativism, multiculturalism and intolerant totalitarian contemporary secular humanism, who raised outraged protest against honoring Columbus on the anniversary of his reaching the Americas on October 12, 1492 after a daring sea voyage which changed history.
Although the evidence is indisputable that Columbus was a mariner of extraordinary skill, courage, and vision, whose journey into the unknown was as visionary and heroic as the journey into outer space is in our time, the evidence is also clear that he was a devout Christian, who planted the flag of Christianity on these shores and avowedly sought to Christianize the indigenous people he believed to be inhabitants of India, thus naming them “Indians.” Thus, we Americans are instructed 700 years after Columbus’ extraordinary journey which changed the world, that it is “racist” to honor Columbus — who dared to go where no [Italian] man had ever gone before”– because It might offend some American Indians,Native Americans, who were in fact treated cruelly by the later Spanish (not Italian) conquistadores and occupiers. vocally supported by a variety of America-despising, morally-superior elitist leftists, ultra-liberals, and revanchists, now assert that not only should “Columbus Day” be abolished, but that all of us would be better off if what is today the United States of America had never been sighted by Columbus.

Many Americans warily take heed of this liberal demand to dishonor Columbus. For in this increasingly secularized age, “racist” is the worst thing one person can allege another to be, and giving “offense” to one member of one tribe or another (e.g., Native American, (Black) African-American (“white” African-Americans are excluded), Hispanic, Homosexual, Hebrew and other Semites, Muslim, etc., et al.,) has become the Eighth Deadly Sin.
There is, however, one individual it is politically correct to bash. This is the American White, Male, Heterosexual, Christian of European descent (an “AWMHCED”), the only category of American not included as a “protected class” under anti-discrimination laws, preferential affirmative action policies, and anti-discrimination enforcement agency regulations.
Thus, many Americans would rather deep-six Columbus Day and Columbus himself rather than give “offense” by honoring him and risk being thought to be-or called-a “racist,” a term now so powerful in causing one to be despised or shunned that the law ought to recognize it as “per se” defamatory for purposes of libel or slander suits.
Therefore, on Columbus Day, Oct.12, 2009, almost one-fourth (24%) of Americans polled stated that Columbus Day should not be observed in the United States. Philadelphia’s traditional “Columbus Day Parade” has been canceled this year. Several institutions of [Liberal] “higher learning (sic) ” are observing the holiday -not in the name of Columbus- but in nicey-nice non-offensive, pagan-like “green” names, e.g., “Fall Day.”
And, perhaps most importantly, the schools which are transmitters of our American history, heritage, and culture, are observing a school holiday but without designating it as Columbus Day or educating the kids about Columbus or why he has

been honored by so many for so long, until this politically-correct era.
For instance, our Seventh-Grade daughter had Friday off from her Portland school. When I asked her why the kids had a day off school on Friday and not Oct. 12, Columbus Day, she said she thought it had something to do with the teachers having some kind of conference or other work to do. But, she said, nothing was said about it being a Columbus Day holiday. In fact, she said no thing in particular was taught about Columbus or his historical significance.
This is consistent with Portland’s and other schools, so liberal, so politically-correct, so much given to teaching cultural relativism and multiculturalism and not teaching about the Founding Fathers or the traditional American values to American students. It brings to mind Abraham’s Lincoln’s observation to the effect that: “Tell me what one generation is being taught in the schools, and I will tell you how the next generation will be governed.”
Fortunately for me, and my daughter, I subscribe to “AmericanMinute.com,” published by one of the great minds of this generation, William J. Federer, author of “America’s Go 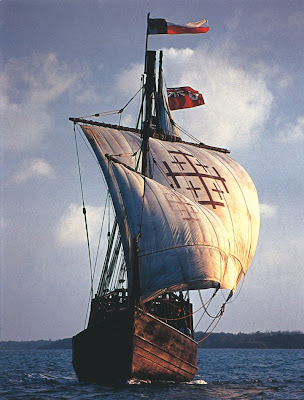 d And Country: An Encyclopedia of Quotations,” the best single resource on what the Founding Fathers actually said and wrote of their beliefs and values.
For the benefit of my precious daughter who will not be taught her American history and heritage in her Portland school, and perhaps for your daughter or other loved American child, of whatever race, color, ethnicity, national origin, or creed, I quote Bill Federer’s “AmericanMinute.com” for Columbus Day, Oct. 12 ,2009:

“Muslim Turks conquered Constantinople in 1453, cutting off the land trade routes from Europe to India and China, so Europeans sought new routes.
“During Portugal’s golden age of sea power, Columbus sailed south along the African coast and then north to Iceland.
“He heard stories of Irish monk St. Brendan sailing in 530 AD to “The Land of the Promised Saints which God will give us on the last day” and of Leif Erickson’s voyage in 1000 AD to Vinland.
“Columbus read 2nd century astronomer Ptolemy’s Guide to Geography, which described a spherical earth with one ocean connecting Europe and Asia.
“Columbus corresponded with Florentine physician Toscanelli, who suggested China was 5,000 miles west of Portugal.
“On OCTOBER 12, 1492, Columbus sighted what he thought was India.
“He imagined Haiti was Japan and Cuba was the tip of China.
“Naming the first island “San Salvador” for the Holy Savior, Columbus wrote of the inhabitants:
“So that they might be well-disposed towards us, for I knew that they were a people to be…converted to our Holy Faith rather by love than by force, I gave to some red caps and to others glass beads…
“They became so entirely our friends that…I believe that they would easily be made Christians.”

Was there cruelty by the Spanish after Columbus’ landing in the Americas? Indeed. Was there cruelty before the landing and occupation by the Spanish? Indeed, there was.
Is the United States of America better for the Christian creed whose ideals and values informed the Declaration of Independence and which first came to the Americas with Columbus? Would the U.S. be a better place if the creeds, ideals and values of the indigenous tribes of the Americas of human sacrifice, slavery, and cannibalism had continued? Would we Americans be the freest people in the history of the world if the United States had evolved not from the Founding Fathers’ Judeo-Christian values which guaranteed in a written Constitution that the rights of the individual must be respected by the government, but had evolved from the indigenous cultures, when it is indisputable that not one indigenous tribe, culture, or civilization in the Americas respected individual rights?
Forgive me if, as an AWMHCED, I emphatically reject such an absurdity, and continue to honor, and teach my daughter to honor Christopher Columbus, the heroic Italian explorer and visionary, notwithstanding that he would be classified today as a culturally and perhaps genetically defective White Male Heterosexual Christian of European Descent by those who despise him, AWMHCEDs, and the United States, which has given them the individual freedom that no member of any indigenous tribe ever had in the Americas before Columbus.
[Rees Lloyd, a longtime civil rights lawyer who has been honored by numerous Black, Chicano, Native American, Asian,and other organizations, including the ACLU of So. Califor nia for “pioneering efforts in the area of workers rights,” and whose work has been profiled on such programs as ABC’s 20/20 and Nightline, is an unapologetic AWMHCED.]
Tell ’em where you saw it. Http://www.victoriataft.com