People are still muttering about first lady Michelle Obama changing the date of Oregon State University’s graduation. Graduation was to have taken place this Saturday but instead Mrs. Obama made the university reschedule it to Sunday to accommodate her schedule. Unfortunately for the dozens of parents who had already made reservations and plans, it doesn’t accommodate theirs.

Although the switch was nailed down in late April or early May it has rankled some people who made hotel and airline reservations months ago based on the University’s master calendar.

I received an email yesterday from one such disgruntled Oregonian with ties to the University and whose friends are quite put out about the switch.

I heard from staff members at O.S.U that it is a nightmare putting this thing together, and that was long before she did what she did.  They hated it the last time she came to see her brother, screwing up not only the highway but everything at the university. 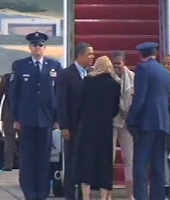 [T]he bottom line how many people will not be able to go see their child/grandchild, because they will miss flights?  I know a person who is giving up their ten tickets because they had plans for the party on Sunday since family and friends are flying in from Minnesota.

The university seems well aware of the problems. From the school newspaper the Daily Barometer,

Overwhelmingly positive reaction by the community to Mrs. Obama delivering the speech was inevitably accompanied by a panicked response to the late date change of the ceremony to fit her schedule.

The first lady plans to lecture graduating students on how to eat right and about what a swell guy her husband. She presumably will slip in a visit with her brother who coaches the men’s basketball team at OSU.