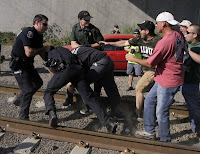 Violence, window smashing, attacking police, holding guards hostage. Just another day in the life of the Longshoreman and their crony bused-in buddies who took over the property of the EGT Company in Longview, Washington.

This latest post is to alert you of another national spotlight that will issue a million candle watt power focus on these outrageous, anti social acts.

Twice in two days the Wall Street Journal has highlighted this story. On tomorrow’s editorial page here in a lead editorial entitled:

A Union Goes Too Far: Violence by unionized longshoreman is noticed by the NLRB,

It turns out a union can go so far that even the current National Labor Relations Board can’t turn a blind eye. A grain operator at the Port of Longview in Washington state was hit with a violent strike…by the International Longshore and Warehouse Union (ILWU). Longshoreman walked out at nearby ports in Tacoma and Seattle.

and the money ‘graf:

There is some concern that the strike against the two big ports could spread to other important U.S. points of entry if ILWU shops begin slowdowns in sympathy with the union in Washington state. If that happens, the events yesterday will become a national issue demanding the attention of a President who is desperately trying to hold his union base together. This one is worth watching.

These two union locals are going after a company for hiring ANOTHER UNION.
As you can see from our posts  these Longshoremen do their violence and hostage taking in defiance not only of the law, but of a ruling by the radical NLRB AND a federal judge. Will Holder’s Main Justice go after these thugs? Stay tuned.

Calls are in to the Governor and Attorney General. Be listening tomorrow for the result.