As if we need any further proof of the ineptness of Barack Obama sitting at the top of our country, is ill-advised attack on Libya, after dawdling away for weeks as Libyan rebels were decimated by the forces of Libyan leader, Moammar Gadhafi, a report from the UK Daily Times tells us much of what our own Blamestream Media does not.

Of note at the beginning of the article,

ABC News soft shoes the situation with U.S. Ready to Hand Over Libya Lead, But Who Will Take It? leaving out all of the mentions of the deepening divide over the unrest on future leadership of the action.

The Arab league, countries like Venezuela, China, Russia and Iran have all criticized the largely U.S. led attacks in Libya while such notable liberals as Rep. Dennis Kucinich and staunch anti-war protester Ralph Nader indicate Obama should be impeached over launching such an attack without first consulting congress for support.

Germany does not want oversight of the “no-fly zone” over Libya to be led by NATO. NATO secretary general Anders Fogh Rasmussen said that the organization would only “help enforce” the no-fly zone, not lead it. France wants a “political steering committee” formed to lead the enforcement of the “no-fly zone” while Italy says it will not join the coalition if France were to lead it.

Already, “Italian PM Silvio Berlusconi had expressed his displeasure were France to get the nod to lead and had even threatened to deprive the coalition forces use of the facilities at the bases in Italy” while UK and American officials dicker back and forth over whether or not target Gadhafi for assassination. The Tripoli Post

On the homefront, several Democrats and Republicans aren’t satisfied with a letter sent them by Obama after the attack commenced explaining the why and the so called plans.

James Carafano of the New York Post asks, “What’s our plan?” regarding the lack of clarity expressed to the nation and congress on just what Obama’s intentions are in this action.

Speaker of the House of Representatives John Boehner (R-Ohio), has sent a strongly worded letter to Obama expressing his displeasure with Obama’s bypassing congress and criticizing his handling of this 3-day old war saying,

“I and many other members of the House of Representatives are troubled that U.S. military resources were committed to war without clearly defining for the American people, the Congress and our troops what the mission in Libya is and what America’s role is in achieving that mission.

“In fact, the limited, sometimes contradictory, case made to the American people by members of your administration has left some fundamental questions about our engagement unanswered.”

In the meantime, bickering amongst the allies continues with “France arguing against giving the U.S. led NATO political control over an operation in an Arab country, while Turkey calls for limits to any alliance involvement,” while V.P. Biden tries to shore up crumbling support amongst Arab Nations.

Within hours of the attack being launched, many were predicting this would end up an all-American conflict and the more it falls apart so early on the more looks like it will be.

As former Chairman of the Joint Chiefs of Staff and Secretary of State during George W. Bush’s first term, Colin Powell once said, “you break it, you own it.”

But no worries. As this “clusterf*ck” continues unraveling, Barack and Michelle Obama remain in South America toasting the high life of royalty and enjoying themselves being treated with undeserved reverence. 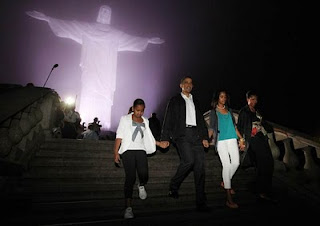