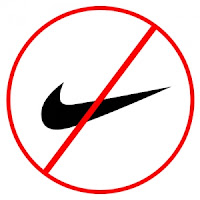 Junkman info here. Nike quit its board position on the US Chamber of Commerce because the Chamber is against the Waxman-Markey global warming bill. I can’t imagine why the Chamber would be against Waxman Markey. I mean, after all, it’s only described as “National Economic Suicide,” it only guts its member businesses’ bottom lines, results in more job loss, slows down the economy and…lookie here at what else both Waxman Markey and Boxer Kerry do to the economy (below). All for a measly 2/10 of 1% of a degree reduction in global warming in 100 years**. The question is, why is Nike in FAVOR of either one of these man made global warming bills? How brainwashed are these guys? CO2 as a pollutant?! Phonied up Al Gore science?! Do these folks–read?
Story here about the pull out of Nike.

Does Nike actually MANUFACTURE anything around here anymore? Maybe that’s why they’re willing to throw other jobs under the bus.

**All of these costs accrue in the first 25 years of a 90-year program that, as calculated by climatologists, will lower temperatures by only hundredths of a degree in 2050 and no more than two-tenths of a degree at the end of the century.