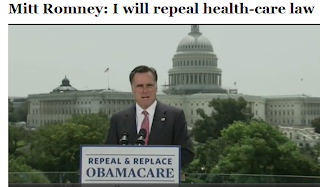 Within an hour of the US Supreme Court decision on ObamaCare, Romney’s reelection campaign picked up. From New York Magazine,

In less than twelve hours after the Supreme Court delivered its landmark ruling Thursday upholding President Obama’s Affordable Care Act, the Romney campaign raised $3.2 million and counting in donations through its website, according to Romney spokeswoman Andrea Saul. Considering that Romney and the RNC had about $107 million on hand at the end of May, the figure itself may not seem that significant. However, Buzzfeed reports that the donations poured in from more than 30,000 individual donors. By comparison, Romney’s campaign only received 27,661 individual donations during the entire month of May.

And the commercials have hit the web and airwaves: