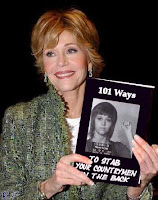 73 year-old Jane Fonda, a name that causes many Veterans, especially of the Vietnam War much angst, has been dis-invited from a speaking engagement she had accepted HERE. She was to speak New Hampshire Women’s Leadership Summit scheduled for June 10 at Nashua Community College, but due to several Veteran’s expressing outrage at the invitation, college president Lucille Jordan “dis-invited” the aging actress.

“In recent days, we have heard voices in our community expressing moving objections to the selection of our main keynote speaker. While the summit encourages public discourse and diverse opinions, we do not wish to cause pain to our veterans. In addition to the many outstanding presenters and panels scheduled, we are working on engaging a new keynote (speaker) for the conference.”

Air Force Veteran Roland Petersen, 72 and one of the Veterans who opposed the invitation said,

“I’m delighted. We accomplished our goal. I wanted the publicity because I don’t want anybody in the country considering honoring her.”

Fonda, who traveled to North Vietnam in 1972, while were still engaged with them, spoke against the US effort in assisting South Vietnam, had her photograph taken where she gleefully smiled sitting on an anti-aircraft gun used to shoot down American aircraft and was well known for her setting up “coffee-shops” outside of U.S. Military installations to encourage to desert the Military.

Although she claims to have apologized, she has never apologized to the hundreds of thousands of Veterans she offended and demoralized. She has offered only hollow words of “regret” for the photo having been taken.

As a Vietnam Veteran myself, I too am pleased that the Nashua Community College saw fit to place America’s Veteran’s over this traitor’s invitation. Fonda has never regretted her complicity in prolonging the conflict and costing many more lives to be lost, American and Vietnamese both.

Although many who never served do not share our views and feel she should be forgiven, one cannot be forgiven until they express regret for such actions as she took. Many Americans say they hold no grudge and don’t see what the big deal is.

The big deal is, it isn’t up to America to forgive her actions, it’s up to Vietnam Veterans, the ones she besmirched and she hasn’t asked us yet.