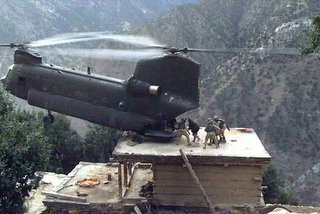 Someone emailed this to me. Here’s the context:
This photo was taken by a soldier in Afghanistan of a helo rescue mission. The pilot is a PA Guard guy who flies EMS choppers in civilian life. Now how many people on the planet you reckon could set the butt end of a chopper down on the roof top of a shack on a steep mountain cliff and hold it there while soldiers load wounded men in the rear??? If this does not impress you … nothing ever will. Gives me the chills and a serious case of the vertigo … I can’t even imagine having the nerve … much less the talent and ability … God Bless ’em !!!!!

Then I got this email and one of our commenters provided this explanation:
Although the text that accompanied copies of this image sent via e-mail in 2006 suggested the activity shown therein was part of an effort to evacuate wounded coalition soldiers, the photo actually captures the Chinook helicopter touching down to receive Afghan Persons Under Control (APUC) captured by members of the U.S. 10th Mountain Division.

So…let me get this straight, if the second explanation is the correct one and (I know enough about this internet stuff to figure that it may be) then it’s even more extradordinary. Think about it, if they’re willing to risk their lives for the bad guys…??? Imagine what acts of heroism they’re willing to do for our friends!

21 thoughts on “Glad They’re on Our Side! Unbelieveable!”