by REES LLOYD
The bizare PC black-transgender-cheer leader matter at Lincoln High School evidences how much needs to be done to eliminate racism in America — that is, Black Racism, and racism of politically correct liberalism which perpetuates racism by its apparent belief that Black Racism must be neither named nor tamed in order “not to be racist,” or perceived as racist. In short, Black Racism is good; White Racism is bad. All in violation of the principle that all racism is evil, not matter the color of the perpetrator, no matter the color of the victim.
That principle was at the heart of the civil rights movement when there was one, and before it was corrupted by politically correct liberalism and race hustlers like Jesse Jackson and Al Sharpton who consistently cow the cowardly liberals of Political Correctness who so fear being perceived as racists (and so fear being sued based thereon) that they smarm their way to charm such despicable hucksters as Jackson and Sharpton and others of their ilk. 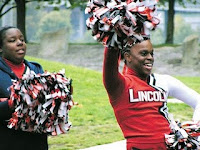 Abandonment of the principle that all racism is evil, including black racism, has resulted in the two coaches and all the girls on the Lincoln Cheer Team resigning in a refusal to become complicit in racism, manifestly discriminatory treatment in favor of a transgendering black student who willfully refused to abide by equal application of the team rules and insisted upon being excused from complying with them.
The coaches have lost employment opportunities, and all of the other members of the cheer team  have been detrimentally impacted by discrimination by a PC Principal, including loss of possible scholarships as well as being able to participate in a school activity.

While I admit that I look upon cheer leading with a jaundiced eye — I have told my own daughter that she has too much athletic and academic talent to spend her time cheering for boys engaged in sports, and should instead  spend her time engaged in the sports herself, a la the basketball-playing Sarah Palin who chose to play the sport rather than cheering for the boys playing.  However, I think what Lincoln HS did to deprive these cheer team girls of the opportunity to participate, and perhaps gain scholarships, to be outrageous.
Why is it praiseworthy for black athletes to have an equal opportunity to participate in sports which may be the key to college, but not equally praiseworthy for non-black cheerleaders to have an equal opportunity to participate in cheer leading teams which may be the key to college for them?
Can anyone seriously assert the transgendering black boy/girl was not the beneficiary of manifestly unequal application of the “law,” i.e., of the team rules, as he/she received discriminatory favoritism not accorded to all others?
How can the racial aspect of this case be dismissed with almost no public condemnation and demand for reversal? Why is it discussed in whispers and not forthrightly?
If the racial roles were reversed, what would be the response?
For instance, if one white narcissistic “look-at-me proud heterosexual” insisted on participating in a cheer leading team composed of black homosexuals and transgendered others, and that one white narcissistic look-at-me proud heterosexual refused to follow the rules otherwise prescribed for all other team members, and insisted on describing his sexual exploits to teammates,  and, among other things, threatened to drop teammates in stunts, would there not be a hue and cry by the PC Liberalatti of “racism” if that white narcissist was excused from the rules he blatantly abused; given a “second chance” to return to the team, pertaining to which the principal told the coaches the principal would stand behind them if that team member had to be dismissed from the team again; and, when that team member’s continued transgressions resulted in the coaches removing him/her, the principal violated her agreement and refused to allow that singular team member to be removed, resulting in the two coaches and the entire cheer team resigning, leaving the school with no cheer team?

If all of that transpired but the perpetrator was white and the victims black, would not all the  PC Liberalatti rise in self-righteous outcry to denounce such discriminatory treatment accorded to one team member manifestly based on race?
Would not there be a rush to the courthouse by breast-beating liberal lawyers  to file lawsuits alleging discrimination in favor of a white causing injury to all the black team members who played by the rules and lost educational, experiential, and scholarship opportunities due to discrimination based upon race?
Would it not be argued that the school board and whose agent the principal is had imposed a racially discriminatory standard in which those who wished to participate in the school-sponsored cheer team must become complicit in racially discriminatory policies in order to participate, which violates not only the specific commands of the federal anti-discrimination statutes, but public policy in general?
I understand that the principal responsible for this outrageous liberal PC  discrimination is a lawyer. She shames both professions.
I am confident in so alleging because I am confident that I have represented more black Americans, Mexican Americans, Asian Americans, Native Americans, and white Americans in discrimination cases, and won them, then she could dream of even participating in, notwithstanding covering herself with politically correct liberal goo to in fact carry out a racially discriminatory policy as a lawyer/principal of a high school. There use to be a lyric, “A working class hero is a hard thing to be.” This principal has evidenced that “A politically correct educator is a despicable thing to be.”
Here again is the simple principle: All racism is evil, no matter the color of the perpetrator, no matter the color of the victim.
If the principal of Lincoln High cannot live with that fundamental principle and administer the rules of the school equally and without racial discrimination, then she should resign; or be removed by the school board. And the persons leading the call for that result ought to be those whose own anti-racism is tainted by the fake anti-racism of politically correct liberals who are carrying out racially discriminatory policies in the name of anti-racism and civil rights.
[Rees Lloyd is a career-long California civil rights lawyer whose work against racism has resulted in awards from such governmental bodies as the Assembly and Senate of the State of California, and the County of Los Angeles; and by unions, including black, asian, Mexican-American, Native-American employee associations; and  profiled by such publications as the Los Angeles Times and the Los Angeles Daily Journal; and featured on such nationally televised programs as ABC’s “NIghtline,” and “20/20,” and such cable broadcasts as “Hannity & Colmes.”]
Tell ’em where you saw it. Http://www.victoriataft.com