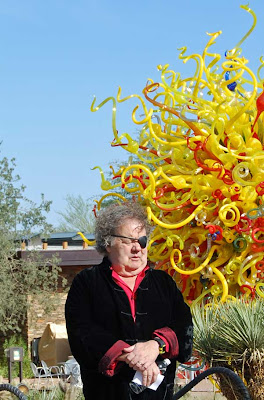 Let’s see now…
Artists part company with Republicans because the GOP generally thinks government shouldn’t get involved with funding art.
Democrats are spending time backing efforts to shut up public debate (censorship doctrine), impose speech codes (on college campuses), and, of course, are wholesale behind shutting up political speech with campaign finance reform (along with their friend John McCain). In other words they’re working on ENDING free speech and the free exchange of artful ideas.
So why would an artist like Dale Chihuly give $50,000 to BHO’s inaugural?

Why do artists believe the Democrats embody the beliefs that nurture art?
Are you kidding me?
Why is the idea of government funding the crucial difference? It seems to me that iconoclastic artists wouldn’t want the government NEAR their work–unless they’re selling a public installation they’ve already created.

38 thoughts on “Dale Chihuly, I’m So Disappointed in You. I Thought You Were Smarter Than This.”