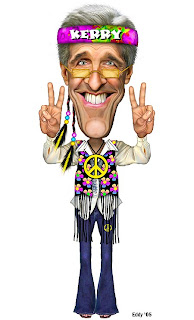 In an interview to be televised on CNN’s Politcal Ticker, Sunday October 18, Chairman of the Senate Foreign Relations Committee and failed 2004 presidential candidate John Kerry says, Obama would be ‘irresponsible’ to send more troops to Afghanistan now

In that interview, Kerry (who is rumored to have served in Viet Nam) says, “the U.S. should listen to the advice of Gen. Stanley McChrystal, the top U.S. commander in that country.”

That advice being “that a critical component of achieving our mission here is, in fact, good governance, and we’re living with a government that we know has to change,” adding that Obama would be irresponsible to send more Troops now.

But, isn’t it also General Stanley McChrystal who has been advising more Troops in order to succeed in Afghanistan?

At the Foreign Relations Committee, Kerry has gone full circle, from witness to chairman.

As a decorated combat veteran of the Vietnam War in 1971, Kerry testified before the panel in opposition to that war.

Kerry was in Afghanistan to review the war there with U.S. military brass and soldiers in the field.

“I’ve asked to meet with guys who are out there slogging it out,” Kerry said before he left Washington last week. “I want to hear what they have to say.”

Will he recreate the Fulbright Commission to give the IVAW their voice and sell out America again?