We recall the fuss made over Obama’s pre-dawn trip to the Western Wall in Israel last week, leaving his “personal and private” prayer note. We also recall how the Wall was festooned with campaign signs, cheapening his humble offering.

Many exressed outrage and criticism when that note mysteriously showed up in an Israeli newspaper.

All may not be as it seemed, though. A Maariv spokesman has said, “Barack Obama’s note was approved for publication in the international media even before he put in the Kotel, a short time after he wrote it at the King David Hotel in Jerusalem.”

Another daily paper, Yediot Aharonot, says they too received a copy of the “personal and private prayer note,” but declined to publish it.

Yediot Aharonot claims, “it now appears that Maariv had collaborated with the Obama campaign in getting the ‘private’ prayer, with its ‘modest’ supplication to the Lord, out to the public, buffing his Christian credentials and showing his ‘humility,’” adding, “What initially seemed to be a journalistic scoop of dubious moral propriety now seems to be a case of an Israeli paper being played by the Barack Obama campaign.”

If what these papers claim is true, it would appear the messiah in waiting is little more than just another cheap politician using anything holy to grab a few votes. 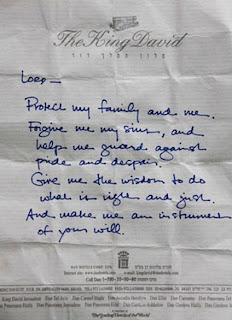 Could it be he would pull a stunt like this to deflect criticism of his being a Muslim in secret? Or, could it be to distance himself further from Black Liberation Theologian, Reverent Jeremiah Wright?

We may never know for sure.

36 thoughts on “B HO’s Prayer Note At The Wall Just A Cheap Campaign Stunt?”