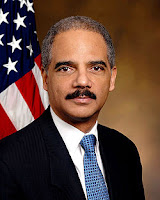 By Pete the Banker
This DOJ ruling “slipped by” the press over the weekend, since the the Mass Media simply didn’t cover it.  This ruling is outrageous and suggests that the Administration doesn’t really care about reforming the real estate finance industry, only enriching their allies

“Justice’s memo, written in mid-October but quietly released over Thanksgiving, came in response to inquiries by the Department of Housing and Urban Development. It argues that Congress’ ban on taxpayer money being “provided to” ACORN does not apply to HUD’s existing contracts with the group.” Story here.

One certainly has to agree with one of the email comments to this Washington Examiner blog post,

“”Despite ACORN’s misfeasance, the Department of Justice has issued a legal opinion suggesting that the group can continue to receive taxpayer money despite the new law…..”
FIRE HOLDER ! ! ! ! !”

This Attorney General was appointed to represent the Administration in legal matters.  Obviously, the allegiance of the Administration in this case is not to the best interests of those governed nor to mortgage borrowers, but to it’s special interest ally ACORN who from all apparent appearances is an organization that has violated the RICO statutes.
Pete