The young woman who accused Oregon State Representative, Matt Wingard, of illegally drugging her–a felony–now admits whoops…not so much. She made it up. 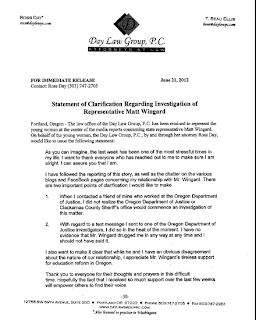 In fact, she now claims via a lawyer letter, that the worst of the allegations against the Wilsonville Republican were not true. AND she claims that she didn’t realize her email to Oregon Justice Department Officials would result in an investigation. The investigation resulted in no charges against Wingard, but by the time the Willamette Week had gotten done with him, Wingard’s career was toast.

Here’s what the woman says in the letter sent out late this afternoon from attorney Ross Day,

The allegations have now sidelined Wingard’s legislative career. In light of the allegations, Wingard was forced by the Republican caucus to not file for re-election. He was lucky, Republican leaders wanted to hang him from a tree.

But as one told me tonight,

“Here’s a question I have: is having sex with an intern in your employ a death penalty in your political career? Is it a death sentence? It didn’t even break sexual harassment rules and training [because it was consensual]. It didn’t break a house rule! For that….everybody throws him under a bus, there’s a media frenzy… He was hit by a truck and wasn’t even close to a road. Sadly, this behavior is so commonplace in Salem that it’s not even worth talking about.”

Goodness knows, Matt Wingard is no saint–he had a sexual relationship with one of his aides for goodness’ sake (ick)– but the young woman, the media and the reputations of the people helping the woman bring the complaint all worked together to drive Wingard from office.

Who else will they go after?

And the most outrageous claim made by the young woman? That Wingard drugged her–leaving the dangling question–did he rape her? Whoops, didn’t happen.

The normally savvy Wilsonville lawmaker had a sexual relationship with his young legislative aide. He was her boss. The tryst was a wholly bad idea.  A match made in hell. Stupid idea. Ookity. Ew.

The woman claimed Wingard pursued her. Fair enough. She was legal but young. He was too old. She claimed he should hire her. He did and then romantically pursued her. She relented. They had sex.*And now she’s accusing him of giving her beer when she wasn’t old enough to drink it. See the story here.

I’m not a moral relativist, but Oregonians need to, as Ronald Reagan once said, not  “be afraid to see what you see.” See this, then:

One difference. Wingard is a Republican and those examples above are Democrats.

This woman was a victim. She was a victim by a man who wanted sex with her and she was a victim of people who had a vendetta against him. If she’s got more to charge against the reputation of Wingard then she should bring it forward post haste. If she doesn’t she needs to get on with her life and try not to be beguiled by powerful men in the future.  Wingard needs to remember to keep his pants zipped.

The young woman wrote this letter because, if she hadn’t, she wouldn’t have been able to withstand the defamation lawsuit that, as predictable as night after day, would have followed.

Her friends egged her on and now they’ve made her a legal laugh track.

I blame the older adults for this episode. And parents? Does your kid smell that? That’s “Willamette Fever.” Teach them to plug their noses and ignore it.