This entire video is an argument for pretty buildings for children because, well, kids won’t drop out, flat line on the SAT’s, and other bad stuff if we have prettier buildings. Really. Watch it.

This entire video is an argument for pretty buildings for children because, well, kids won’t drop out, flat line on the SAT’s, and other bad stuff if we have prettier buildings. Really. Watch it.

Code Pink has no shame. Never has.

The small band of pissed off chicks from the 70’s has just moved their insipid, other-people-paid-for vanity protests to Occupy-the-Republican-National Convention.

Before they were running guns to the Palestinians, the Code Pinkos camped out in front of Walter Reed Medical Center on Friday nights when they knew wounded troops

would be taken out by volunteers for a night out. Pinkos carried signs reading, “We Support The Murder of American Troops,” ala Westboro Church crackpots. They were arrayed by fake coffins. They did it to inflict as much pain as possible on our troops whom protesters knew would be passing by. But that was when a Republican was in office. It’s not nearly as much fun now that one of their socialist buddies is in power and presiding over a war that has seen more combat deaths in Afghanistan that George Bush ever did. Shhhh… don’t tell anyone, the media sure haven’t. 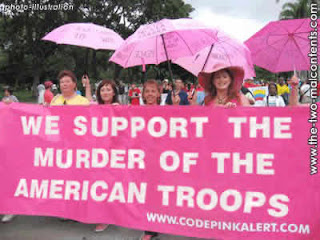 And now the idiocy continues.

Somewhere between the transformation from anti (GOP led) war group, the flotillas to aid terrorists and now Occupy, Code Pink decided the way to get respect in protest circles was to draw a target right on their vaginas.

Today I talked with Lee Stranahan of Breitbart.com about the protesters he was seeing at the RNC. Hear our discussion after the break in the noon hour here. He described the Code Pinkos protest but, being a southern gentleman and all, couldn’t actually describe what they were wearing.

Don’t worry this video will:

We’ve seen this full frontal rudity before. We’ve seen an active effort to get ladies to stop being ladies and be loud mouthed, ill bred, disgusting louts. Remember this (cleaned up) picture from the Occupy Portland May Day protest? Yup.
Ladies, if you want “respect” this ain’t the way to get it. 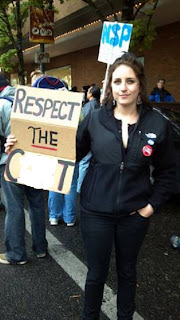