Contributing to this post are Dan Sandini, Victoria Taft, Lew Waters and Rees Lloyd. The latest is at the bottom.

Wade Varner’s circle of influential friends is as large as his big bare behind as Citizen Journalist Daylight Disinfectant shows us here.

The professional protester who apparently will drop his pants busy life to protest anywhere is seen in the following video ‘mooning’ Tea Party members at the so called “Family Friendly” Occufest (Sam Adams’s planned clash with police in November). See it below.

But hypocrisy of the left is not news because only that which is out of the ordinary qualifies as news. There’s something else in his past that interests me.

Do you see the video and the pictures of our boy Wade with all his political friends? Do you know that part of his sales pitch for more homeless Occupations includes his combat stint in Vietnam? See this story about Occupy Portland here. Here’s a key excerpt:

Vietnam veteran Wade Varner says he and other Occupy protesters are already applying for a permit for a demonstration.
“It’s only a matter of a few more weeks and we’ll be back here holding our general assemblies, we’ll be back with a 24-hour vigil. And that’s what matters most. Because if the people don’t have a place to gather and talk about their grievances, then what the hell did I fight for,” Varner said. According to Varner the plan is not to camp in the park, but have a presence 24/7. 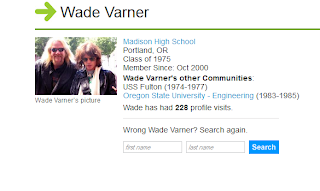 Hmm…this is interesting. His information here claims he graduated from Madison High School in Portland in 1975. It’s our Wade Varner, right? Or is it a doppelganger? Our combat troops went home in 1973 and the draft ended in that year according to Vietnam Combat Vet and Blogforce Buddy, Lew Waters. We left Saigon in April of 1975–before he graduated. However, his parents may have signed paper work for him to serve early.

I wonder what his story is.

“Wade’s a disabled Vietnam Veteran who used to repair nuclear reactors for Navy subs, but like so many Vets he’s currently homeless.” (here)

Note his trusty assistant in grievance peddling, Ibrahim Mubarak, who started “Dignity Village” encampments in downtown Portland and near the airport. You may also remember Ibrahim and his fellow socialist (Caucasian) friends race baiting and name-calling black Tea Party members (including children–nice touch boys) at last year’s Tea Party. See Daylight Disinfectant’s video:
I think before one more permit is issued to these people–oh wait, they just take they don’t ask–we should insist on a little honesty. Or is that too much to ask around here?
***UPDATE***
Lew adds that Varner could qualify as a Vietnam “Era” vet but it still doesn’t answer the question of how he could be on a sub tender that was, 1) in dry dock, 2) deployed to the Med following repairs during the time he served.
Here’s what Lew found:

Found some more history of the USS Fulton. At the time he claimed to have served on her, the ship was sent to the Mediterranean just prior and then it was overhauled, not completed until 1976.

After a shipyard overhaul in 1976, Fulton returned to New London to continue to support Atlantic Fleet Submarines. She was modernized in 1983-1984 during an extensive overhaul conducted at Electric Boat in Groton, Connecticut and General Dynamics, Quincy, Massachusetts. In January 1985, she made a four-month deployment to the Mediterranean where she provided maintenance for the 6th Fleet submarines in La Maddalena, Italy.
http://en.wikipedia.org/wiki/USS_Fulton_%28AS-11%29#1972-1991
See also: http://ussfulton.org/history.html
It never served near Vietnam during the war.

Questions remain:
He was born in May of 1957. That puts him at 17 in 1974 when he claims he joined the Navy. Can 17 year olds join the Navy? Do you need parental consent? If Mom or Dad signed off it appears he was good to go. Here.
Is it misleading to tell your compatriots that you’re a Vietnam Vet if you didn’t serve in country?
Can you legitimately say you’re a combat vet if your ship was never near a combat zone and there was no war going on?
Don’t you continually correct the record if reporters call you a combat vet?

However, the USS Fulton Association does not list him as having served as a crew member at any time. See, http://prop1.org/clues/942747/decwv.htm
The only Varner  listed is: Ray E. Varner, Jr., who served on the USS Fulton in 1960-62, and died in 1998. That varner lived at 401-Runyon Ave., Middlesex, NJ.
The USS Fulton was a submarine tender which was commissioned in 1940 in WWII.
The USS Fulton website gives the history of the tender. There is no indication that the USS Fulton was ever deployed to Vietnam area at any time.
It is noted that in 1976, it was again refitted and was the first WWII-era ship to be sent to the Mediterranean.
Other than that, after WWII, the USS Fulton, which underwent several refittings, was used only in Atlantic waters.

We’ve got a call out to the USS Fulton foundation to double check. We’ll let you know. So far it’s not looking so good for Mr. Varner.

Here’s the latest from Rees Lloyd, who’s been digging around.

If he dropped out after or during his Jr. Year, it is possible he joined the Navy and served on the USS Fulton, as he claims. However, even if that is possible, the USS Fulton was never deployed to Vietnam. Thus, at best, he could be no more than a Vietnam-era vet, not a  “Vietnam War vet,” or “combat vet.” If he is a “disabled vet,” it is not a combat injury. The school has no records on graduates prior to 2003.

Lew finds that Varner is listed as a crew member and a hull technician. Here and here.

But was he a Vietnam vet? And how did he become disabled if he didn’t see combat? 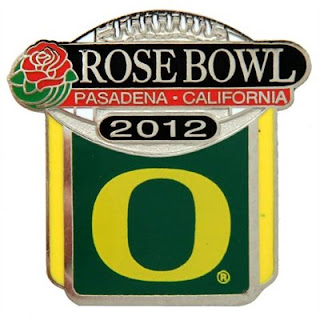