From the cop shop Sunday night:

Today, Sunday November 13, 2011, the Portland Police Bureau has cleared both Chapman and Lownsdale Square parks. During today’s operation, more than 50 arrests were made of people who either wanted to be arrested or refused to leave Chapman Square.

Sunday morning, the majority of occupants of both parks had moved out and taken their belongings.

Based this information and that the Parks Bureau was ready to begin cleaning and fencing off the parks, the Portland Police Bureau moved forward in a methodical and thoughtful manner to clear the remaining people from the parks. Announcements were made to people in the park that the park was closed and those refusing to leave would be arrested.
Officers moved through the park slowly and effected arrests of those who

remained the park. Arrests were made out of the Northwest corner of Chapman Square, where a large crowd gathered. In one final structure, some people refused to leave so officers bypassed the structure and continued to clear the park, then returned and arrested those who remained in the structure. Presently, the Portland Parks Bureau is in the process of fencing off the parks and continuing the massive cleanup of debris. Officers are continuing to maintain a safety perimeter around the parks to allow the safe cleanup to continue. Traffic is still closed for several blocks around Chapman and Lownsdale Squares.
The Portland Police Bureau today called for mutual aid from Portland area law enforcement agencies to assist in maintaining public safety citywide. Law enforcement officers from the Beaverton, Hillsboro, Washington County, Tigard, Tualatin, Lake Oswego, Clackamas County, Multnomah County, Gresham, Oregon City, Oregon State Police, Milwaukie, Salem, and Vancouver responded to assist the Portland Police Bureau with maintaining public safety in the City of Portland.
Many of these officers were in neighborhoods responding to police calls while Portland Police officers were working Downtown to assist with the park closures. Crowd Control teams from Salem, Beaverton, and Vancouver, Washington responded to assist as well.
The Federal Protective Service also requested assistance from the Portland Police Bureau to clear Terry Schrunk Plaza. More than 300 officers (including outside agencies) assisted with citywide police operations. 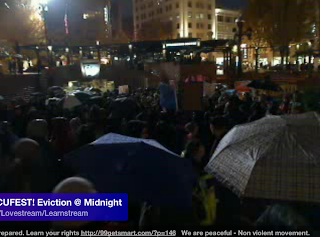 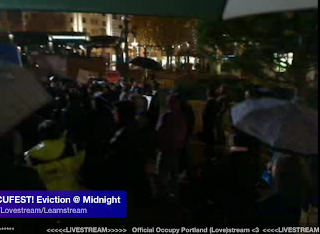 It’s wet, smelly and who knows what will happen tonight. Riot police are at the ready at Occupy Portland. Check out at your own risk:

Watch live streaming video from occupyptown at livestream.com
Tell ’em where you saw it. Http://www.victoriataft.com