Frank Buckles, the last American World War One Veteran died peacefully in his sleep at his home. He was 110 years old.

During WW1 he served as an Ambulance driver in Europe and spent 3 years of World War Two held captive in a Japanese POW Camp, having become a ships officer after the “Great War.”

Buckles was an outspoken advocate for the renovation and repair of the D.C. WW1 Memorial.

May he rest in eternal peace, knowing that when it mattered, he did make a difference.

One era dies and another begins.

“In 2008, U.S. Rep. Shelley Moore Capito, W.Va., sponsored a bill to allow Buckles, upon his death, to lie in honor in the U.S. Capitol Rotunda.

“‘Mr. Buckles represents the very best of this country — service, determination and patriotism. He has lived through some of the most historic events in American history, from the Great Depression to two world wars to the invention of the Internet,’ Capito said in a previous statement.” 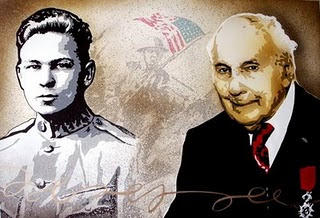 Corporal Buckles body is at a Washington D.C. funeral home.

That moveon.org is the overseer of Uncle Sam’s Plantation obviously escapes the lass.

“To see what climate effects such a regional nuclear conflict might have, scientists from NASA and other institutions modeled a war involving a hundred Hiroshima-level bombs, each packing the equivalent of 15,000 tons of TNT—just 0.03 percent of the world’s current nuclear arsenal.”

“The researchers predicted the resulting fires would kick up roughly five million metric tons of black carbon into the upper part of the troposphere, the lowest layer of the Earth’s atmosphere.”

“In NASA climate models, this carbon then absorbed solar heat and, like a hot-air balloon, quickly lofted even higher, where the soot would take much longer to clear from the sky.”

“Earth is currently in a long-term warming trend (I bet this is news to many real climate scientists). After a regional nuclear war, though, average global temperatures would drop by 2.25 degrees F (1.25 degrees C) for two to three years afterward, the models suggest.”

Okay all you anti-war leftists, do your part. March in support of nuclear war, to “save the earth.” Who would have ever thought bought and paid for anti-war protesters were actually harming the earth by preventing nuclear war?

I wonder if this research has been peer reviewed?

The tactics of hate that were used to form the now failed Soviet Union.

I would expect this from Venezuela, Iran, North Korea or Cuba, but I see that those who preach tolerance and diversity actually mean only for their view.

Keep it up, liberals. The world is noticing.

That moveon.org is the overseer of Uncle Sam’s Plantation obviously escapes the lass.

They’ll at least keep us entertained and show the world the true nature of today’s left and public unions who don’t care whether taxpayers survive or not.

From the YouTube page, “At the pro-public sector union rally at the State of Illinois building in Chicago on February 26th, one protester who calls himself PackerBackerBob carried a sign claiming “the GOP hearts the KKK.” When asked to explain it, he offered $1 million to anyone who could prove it wrong before challenging anyone who disagreed to a fight.”

He should go but won’t. Nothing but an upside in 2012 for GOP. Wu sells out an entire district. They’ll make him pay.