From the website, “Herman Cain lead a Q&A session at the Douglas County Tea Party when a young woman asked him about the attack by the Left on our Judeo-Christian heritage in America…He addressed her question, then went to the last question of the night,”

Watch for yourselves the reaction to the surprise the small crowd receives; 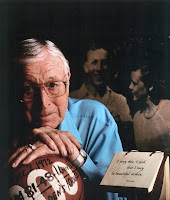 He kept it strong and simple. The first thing he did was make sure his player had good socks. If you take care of the feet, he said, you take care of what’s most important. In basketball, of course, as in any court sport, foot work is the essence. Cuz, dude, if you can’t GET to the ball you got no game. Right?
Woodisms after the jump:

Here are more:
A coach is someone who can give correction without causing resentment.
John Wooden

Adversity is the state in which man mostly easily becomes acquainted with himself, being especially free of admirers then.
John Wooden

Be prepared and be honest.
John Wooden

Failure is not fatal, but failure to change might be.
John Wooden

If you’re not making mistakes, then you’re not doing anything. I’m positive that a doer makes mistakes.
John Wooden

It isn’t what you do, but how you do it.
John Wooden

EMPLOYERS ON STRIKE (LINK HERE)
It’s too bad we can’t do the Census every year, because maybe the U.S. economy would then show some jobs growth. That quip was one of the rueful asides we heard yesterday as Americans learned that the economy created a net total of 431,000 new jobs in May, including 411,000 temporary Census hires.

The private economy—that is, the wealth creation part, not the wealth redistribution part—gained only 41,000 jobs, down sharply from the encouraging 218,000 in April, and 158,000 in March. The unemployment rate did fall to 9.7% from 9.9%, but that was mainly because the labor force contracted by 322,000. Millions of Americans, beyond the 15 million Americans officially counted as unemployed, have given up looking for work. 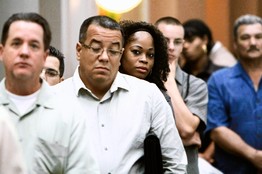 Job seekers wait in line at a National Career Fair.

Worst of all, nearly half of all unemployed workers in America today (a record 46%) have been out of work for six months or more. Normally job growth accelerates during the early stages of an economic rebound, but this dismal report suggests that the recovery remains well short of becoming a typical expansion.
There were some slivers of good news in the May jobs report. For those who have jobs, the average work week rose by 0.1 hours to 34.2 hours and earnings nudged upward by 0.3%. Manufacturers added 29,000 workers, and their hours worked jumped 5.1%, the best since 1983.
Perhaps this is what White House chief economist Christina Romer was looking at yesterday when she cited “encouraging developments” in the jobs market and “continuing signs of labor market recovery.” We doubt this was the private reaction in the Oval Office, whose occupant was told by Ms. Romer and economic co-religionist Jared Bernstein that the February 2009 stimulus would kick start a recovery in growth and jobs. Whatever happened to the great neo-Keynesian “multiplier,” in which $1 in government spending was supposed to produce 1.5 times that in economic output?

Imagine if Ms. Romer had instead promised in 2009 that Congress could spend nearly $1 trillion, and 16 months later the unemployment rate would be nearly 10% and that more than 2.5 million additional Americans would be without jobs. Would Congress have still spent the cash? Well, sure, Congress will always spend what it can get away with, but the American public would have turned against the stimulus even faster than it has.
The multiplier is an illusion because that Keynesian $1 has to come from somewhere in the private economy, either in higher taxes or borrowing. Its net economic impact was probably negative because so much of the stimulus was handed out in transfer payments (jobless benefits, Medicaid expansions, welfare) that did nothing to change incentives to invest or take risks. Meanwhile, that $862 billion was taken out of the more productive private economy.
Almost everything Congress has done in recent months has made private businesses less inclined to hire new workers. ObamaCare imposes new taxes and mandates on private employers. Even with record unemployment, Congress raised the minimum wage to $7.25, pricing more workers out of jobs. The teen unemployment rate rose to 26.4% in May, and for those between the ages of 25 and 34 it rose to 10.5%. These should be some of the first to be hired in an expansion because they are relatively cheap and have the potential for large productivity gains as they add skills.
The “jobs” bill that the House passed last week expands jobless insurance to 99 weeks, while raising taxes by $80 billion on small employers and U.S-based corporations. On January 1, Congress is set to let taxes rise on capital gains, dividends and small businesses. None of these are incentives to hire more Americans.
Ms. Romer said yesterday that to “ensure a more rapid, widespread recovery,” the White House supports “tax incentives for clean energy,” and “extensions of unemployment insurance and other key income support programs, a fund to encourage small business lending, and fiscal relief for state and local governments.” Hello? This is the failed 2009 stimulus in miniature.
It’s always a mistake to read too much into one month’s jobs data, and we still think the recovery will lumber on. But if Ms. Romer wants this to be more than a jobless recovery, she and her boss should drop their government-creates-wealth illusions and start asking why so many private employers remain on strike.

On the blog DJ said:

And yes Victoria, BO and the Dems are lame asses in their response to the Gulf. Throw them all out NOW.

I have no idea if this is from the Gulf or Valdez or… but here come the: don’t-use-oil plea. My plea is this: how ’bout drill baby drill on land (ANWR anyone?) where it’s safer. I’m all for renewables as long as they’re as cheap as black gold, Texas T. Nuclear anyone?

We struggled with whether or not to share this photo, taken of a bird on the beach at East Grand Terre Island, LA on Thursday. It’s hard to look at.

But we have to face where our addiction to oil has taken us—and this photo brings that home: (Click here if you can’t see the image) 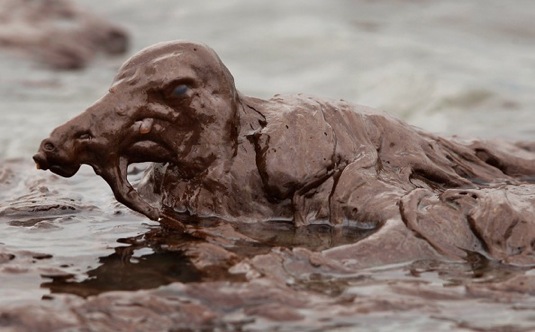 The disaster in the Gulf of Mexico is heartbreaking—but if an image like this can do anything, it can sear into our minds the fact that we need a real plan to get America off of oil.

Forward this to ten of your friends, and sign the petition to Congress and the White House today:

From the website, “Herman Cain lead a Q&A session at the Douglas County Tea Party when a young woman asked him about the attack by the Left on our Judeo-Christian heritage in America…He addressed her question, then went to the last question of the night,”

Watch for yourselves the reaction to the surprise the small crowd receives;

…Janet Napolitano is so willing to call the Times Square Bomber a “one off.” The response on the Gulf oil spill is to A) trash oil companies, B) suspend drilling, C) express desire to take over BP (Obama advisor Reich).
Why so quick to say a terrorist is a perpetrator of a singular, unique event, but not an oil spill? We’re willing to give a pass to a purposeful bad actor but unwilling to give that same benefit of the doubt to an industry which keeps our country running?
Odd, no? These people have very strange priorities and beliefs.