No kidding, right from CBS through a video at Real Clear Politics

Losing the 2000 election did their marriage “irreparable harm” according to family friend, Sally Quinn.

No kidding, right from CBS through a video at Real Clear Politics

Losing the 2000 election did their marriage “irreparable harm” according to family friend, Sally Quinn.

Some photos I took of the Westboro cretins and counter-protesters today at Heritage High School. 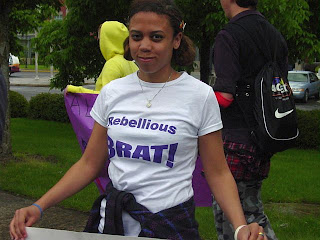 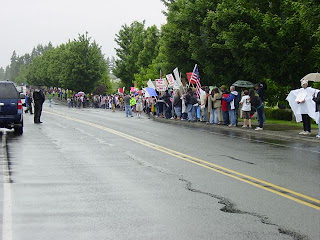 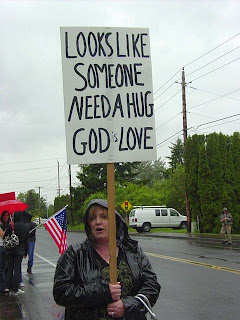 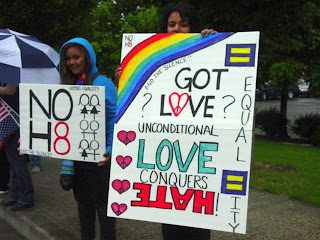 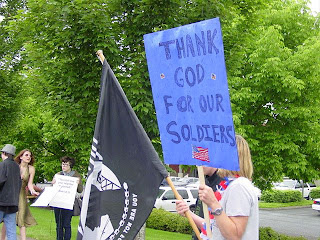 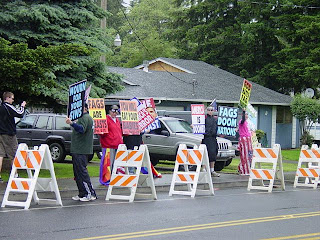 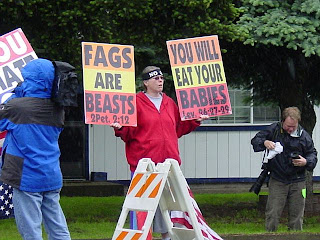 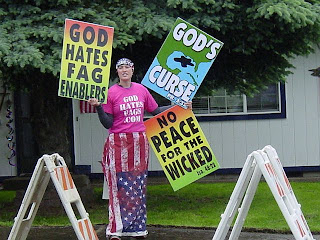 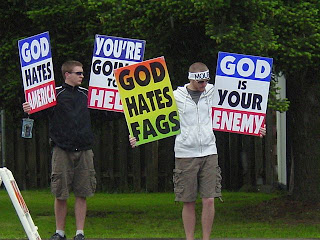 Lew this is a great post. I just wanted to add one thing here. Last week when I had Shirley Phelps on the show she said she wouldn’t overtly seek attorneys fees from Al Snyder, whose son died in Iraq. These bozos from WBC protested his funeral. Now the Supreme Court has indicated it will take up the case:

The bill was crafted in response to a protest movement, “Open Carry,” in which activists wield unloaded guns in public places to publicize opposition to gun-control laws as well as difficulties in obtaining concealed-weapons permits.
Supporters of AB 1934 said that current law places police in an untenable position, responding to reports of gun-wielding pedestrians but unable legally to demand that such protesters show identification or proof that their weapon is registered.
Opponents countered that AB 1934 would infringe on Californians’ right to bear arms and to protest peacefully in whatever manner they choose.
State law bans the carrying of loaded firearms in public, but not unloaded weapons.
AB 1934 would make it a misdemeanor, punishable by up to six months in jail, to carry an exposed, unloaded gun in a public place or on a public street inside a city or in prohibited unincorporated areas of a county.
The bill contains numerous exceptions, including display of a firearm by a peace officer, authorized military organization, firearm dealer, or by a licensed hunter while engaged in that sport.
AB 1934 now goes to the Senate.
Categories: Bills (2009-2010 session)

Follow
Arizona Governor Jan Brewer is scheduled to meet with President Obama on Thursday after the President has dismissed the idea of such a meeting. Apparently after Republican cajoling, he’s had a change of heart.
And this is what the good Governor should tell the most powerful man on the planet:

You’re only as strong as the line you take on the sovereignty of this nation.

Without the United States BEING the “UNITED” States there’s nothing to talk about.

The President has taken a line against the new Arizona law pretending there’s something “new” and “different” here, but even that curmudgeon, Jack Cafferty, has bothered to get himself up to speed on the law. And even he presumes to school the catterwalling campaigning Democrats this election season:

Brewer is in town for a meeting of the Council of Governors, an organization President Obama created by executive order in January — before Brewer signed her state’s controversial immigration law — to help foster better state-federal relations.

Betcha didn’t know we had ANOTHER group for the deprived Governors did ya?
Brewer said she’d hoped to meet with the President when she came for the new organization’s meeting:

“I think it’s important that the leader of the United States and the governor of the state of Arizona sit down face to face and have a conversation of exactly what is going on in Arizona and ask him for his help and hope that he responds positively,” Brewer told reporters, according to the Verde News. “I think that he owes it to the people of Arizona if not to the people of the United States to sit down and have a conversation with him in regards to what is needed at our border. We need to secure them.”

At first Brewer was told to pound sand but the the man who helped write the Arizona law (which by the way mirrors US law) took a decidedly jaundiced view:

On Tuesday, the author of Arizona’s immigration law — which Obama has called “misguided” and expressed concerns that it might be applied in a “discriminatory” fashion — criticized the president’s failure to make time to meet with Brewer, calling it “an insult.”

Republican state Sen. Russell Pearce told Fox News that the president is “willing to have a beer fest with an officer in Cambridge after he misspoke. … He misspoke on this bill also and he’s not willing to meet with the governor of the state of Arizona?”