Think about the lies that were told to keep viable Sam’s prospects of winning the mayor’s office.
Think about the lies he told to his friends, the voters, co workers, the voters, friends, the voters. All to save face.
What did he lie about?
He admits he didn’t “mentor” Beau Breedlove. That was a cover story.
He admits his lunch with the 17 year old Breedlove was a “date.”
He admits he lied about it to win the election.
Read the letter he used city resources to send and post (emphasis mine):
An Open Letter to Portlanders
By Sam Adams
Dear Portlander,
As you have probably seen in the media, I have been the target of a nasty smear by a would-be political opponent. I will not dignify the substance of this smear by repeating it – if you read the accounts you will see there is no foundation to it. The reason is simple: it is untrue.
This kind of ugly politicking may be commonplace in other cities and at the national level, but Portland and Oregon largely has been blessedly free of it. It saddens me that it has been introduced here, and I have faith that Portlanders’ rejection of it will mean that this incident is an anomaly.
About this attempted smear, here is what I want to say.
I have in the past, and I will in the future, respond to people who reach out to me for help and advice. This is especially true when it comes to young people.
Growing up in Newport and Eugene, Oregon I remember when I was a teenager and I had nobody who I felt I could talk to at a time I desperately needed someone to give me advice and perspective about coming to terms with being gay. I came through it. Not everyone does.
Gay youth suicide rates, homelessness and depression are still too high. And adequate services have been lacking: Reasons why I co-founded Portland’s Q Center, served on the Boards of Cascade AIDS Project, Basic Right Oregon and lobbied the state legislature in support of statewide non-discrimination laws.
I didn’t get into public life to allow my instinct to help others to be snuffed out by fear of sleazy misrepresentations or political manipulation. I understand the need for good judgment, and I keep within the bounds of propriety — as I did in this case.
I’m glad that people consider me as a person they could come to for help, understanding and support. I work at it. And I hope that you do too. Local programs needing mentors have long waiting lists.
About my political future: this attempted smear will not deter me from serving Portland in the best way I know how. Soon I will be with sharing with you my future political plans.
With warm regards,
Sam
Now what kind of impact did Sam’s lies have? A direct impact on the election. See the following post from a lefty blog that gave voice to Sam’s line of defense:Leonard and Katz, however, saw the allegation for what it was; a political smear campaign against a possible rival candidate:
Those he told, including Leonard and former Mayor Vera Katz, said they took it as an attempt at political assassination.
In the fallout, Leonard went so far as to tell Ball to give up any hopes of seeking political office: “As long as I’ve been doing this stuff, and keep in mind that I started in union politics, I’ve never felt so dirty. I’ve told Bob, ‘You’re not running for mayor. You’re not running for City Council. You’re done.’ “
“It’s just a despicable thing to put out there about someone, particularly about a gay man,” Leonard said. “It’s the worst kind of political smear.”

Interesting. Now think about what the truth is now–as told by Sam himself. And then read this pap:
“I told my staff, ‘This is a 17-year-old. Make him feel welcome. Keep an eye on him,’ ” said Adams, 44. “I listened to his story. I tried to offer my own perspective, given my own background. I could’ve just said, ‘This looks bad, so I can’t help you.’ But I wanted to help.”
“If you wanted to take a jaundiced eye to it, I’m sure there are plenty of situations that you could look at and say maybe I should have just said, ‘I’m sorry, I can’t talk to you about that,’ ” he said. “If someone comes to me looking for advice or perspective, I want to be able to offer it. At the same time, I’m very careful. I set boundaries.” 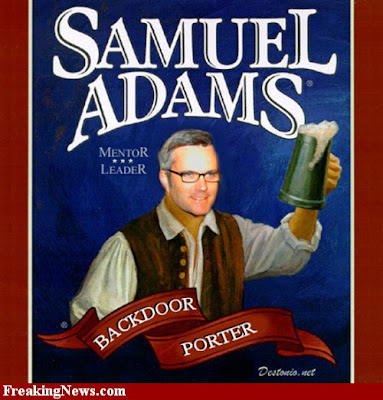 The NYT (excerpted nearby) and the
WSJ (here), which reported today:
“I lied in an effort to gain office,” Mr. Adams told the editorial board of the state’s leading newspaper, The Oregonian, this week. “I really screwed it up.”
Tell ’em where you saw it. Http://www.victoriataft.com 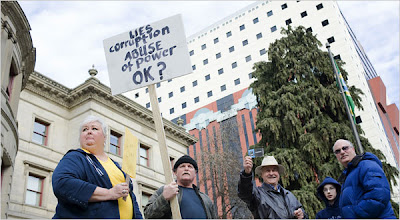 Excerpts from the NYT story:

He was railing about Sam Adams, who three weeks ago became Portland’s first openly gay mayor, thanks, in part, to people like Mr. Wood, a 46-year-old environmental lawyer who voted for Mr. Adams last year.
Rest here.

And he was JR Rider’s attorney.

Eric found this on one of the blogs out there for Sam. The people who are calling for Sam to resign have already emailed and phoned in, now his base is calling and emailing to send a different message.

From an anonymous source at city hall, I just received this forwarded email:

“I took a look at TrackIT today to see how many people emailed Sam on Portland Online. Under the “just want to say hi to Sam” category, there were nearly 700 since Monday. I exported them to excel and did a little math. These numbers are approximate, as I couldn’t read every message. You can tell where they stand by the subject line in the message, and sort in that way.

There are another 228 in the “other” category.

Again, these numbers are approximate… but I think they’re telling.”

See? Pretend there’s an overwhelming number of people who say they don’t care that you jacked an election– what was the wording you used again, Sam?– oh, yes now I remember, “False pretenses,” play victim, set a bad example for the community, believe the flatterers and your ‘base’ will give you a pass.