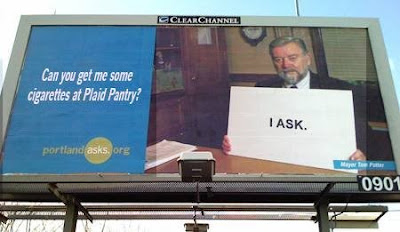 Multnomah County declares an emergency. The region runs low on de-icer and they’re left waiting at the train station for supplies. Portland’s government commuters discover the limitations of government choo choos and buses and…

Is that his legacy?
Potter’s daughter phoned KATU to tell them that he went to work today but his bus broke down and he had to walk the rest of the way. Perhaps he was in this line for the bus at one point.h/t Craig.
This is actually a picture of the bus taking people from Gateway Transit Center to where ever. The Max to the airport, three stations in Gresham, Interstate Max all were down due to the freezing weather. 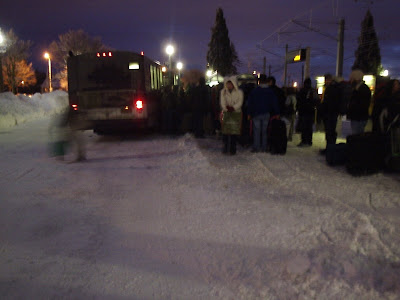 From an article in the Washington Times

For much of the past seven years, President Bush and Vice President Dick Cheney have waged a clandestine operation inside the White House. It has involved thousands of military personnel, private presidential letters and meetings that were kept off their public calendars or sometimes left the news media in the dark.

Their mission: to comfort the families of soldiers who died fighting in Afghanistan and Iraq since the Sept. 11 terrorist attacks and to lift the spirits of those wounded in the service of their country.

Mr. Bush, for instance, has sent personal letters to the families of every one of the more than 4,000 troops who have died in the two wars, an enormous personal effort that consumed hours of his time and escaped public notice. The task, along with meeting family members of troops killed in action, has been so wrenching – balancing the anger, grief and pride of families coping with the loss symbolized by a flag-draped coffin – that the president often leaned on his wife, Laura, for emotional support.

Mr. Cheney flew to North Carolina late last month and met with 500 special-operations soldiers for three hours on a Saturday night at a golf resort. The event was so secretive that the local newspaper didn’t even learn about it until three days after it happened.

Mr. Cheney and his wife, Lynne, also have hosted more than a half-dozen barbecues at their Naval Observatory home for wounded troops recovering at Bethesda Naval Hospital and Walter Reed and their spouses and children.

Mr. Bush sees his job as providing comfort to those who have sacrificed so much. “The definition of comfort is very interesting. Comfort means hug, comfort means cry, comfort means smile, comfort means listen. Comfort also means, in many cases, assure the parent or the spouse that any decision made about troops in combat will be made with victory in mind, not made about my personal standing in the polls or partisan politics.”

It remains to be seen whether his successor will feel any obligation to comfort the Troops, or like others before him, treat them like door openers and porters.

I got two news flashes this evening and had to toss them on the blog. Can you imagine if the Bush administration tried this and the reaction it would have engendered on ANY issue? Let’s say WMD, Gitmo, “Lying our way into Iraq,” “warrantless” wire taps, for instance? Imagine a media willing to bulletin these messages with no qualifiers…

Oh, and the adoring media hastens to add:

Politico.com Breaking
News:—————————————————–President Obama
has now upped his goal to creating nearly 3 million jobs over the next two
years, up from 2.5 million just a month ago, Democratic officials said
Saturday.

Well, as long as you’re making it up as you go along, why not raise it to 4 million new jobs??

Sure to delight some and anger others,

A little noticed article by Reuters is claiming the President of the United States and 13 other world leaders were tried, convicted and sentenced to 20 years imprisonment for War Crimes.

Presiding judge Veroljub Rakitic said, “In the name of the people…We sentence…to individual prison terms of 20 years each,” to applause from spectators in the Court Room as he read of the 14 names.

The 14 were charged, tried and found guilty of inciting a war of aggression, war crimes against the civilian population, use of banned weapons, attempted murder and violation of territorial integrity. Rakitic said arrest warrants would be forthcoming.

According to the charges filed, “They fired 600 cruise missiles and made 25,119 air sorties attacking both military and civilian targets, killing and wounding many people and causing mass destruction of property.”

Given their coverage of this scandalous administration over its 8 years, I am left wondering why we read nothing of this in our own media.