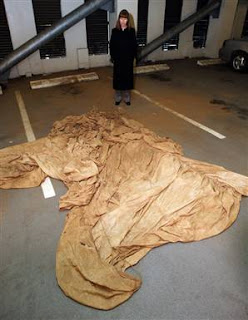 Children playing in Amboy discovered an old tattered parachute. At the urging of the children, their Dad contacted the FBI. FBI agent Larry Carr overlaid the family’s address onto a map made in the early days of the investigation and learned they lived right in Cooper’s most probable landing zone, between Green and Bald mountains.

The FBI is hoping someone with expertise in parachutes will come forward and inspect the remnants they have to determine if it is the type of parachute used by Cooper in 1971, a Navy Backpack 6 with a 26-foot canopy, before beginning to excavate the property.

Is a major Pacific Northwest mystery and America’s only unsolved high jacking closer to being solved, 37 years later?

If it is Cooper’s parachute, will it just open more questions about how did the money discovered on the banks of the Columbia in Vancouver back in 1980 get there from Amboy?

Do we even want the legend of D.B. Cooper solved?

“I don’t remember anyone offering me tea.”

“The dictum around the Oval Office in the ’90s was: ‘If a place was too dangerous, too poor or too small, send the first lady.'”

“As a reminder of the dangers that remained despite the official cease-fire, each of us was required to wear a flak jacket on the plane, and the Secret Service moved Chelsea and me up to the armored cockpit for the landing. Everyone else was told to sit on their bulletproof vests.” 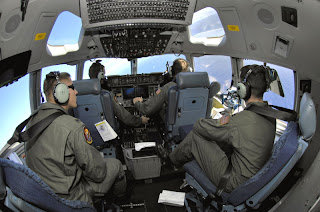 Any armor present in the cockpit would be panels around the pilot and co-pilot seats, as is shown above in a photo of a C-17 cockpit.

“There was supposed to be some kind of a greeting ceremony at the airport, but instead we just ran with our heads down to get into the vehicles to get to our base.”

CBS countered this canard with video of her actual departure from the plane and being greeted on the tarmac,

An AP reporter wrote after the trip in 1996,

“Mrs. Clinton chatted with journalists and crewmen during the 90-minute flight, wandering around the spacious plane in a black pantsuit – a contrast to the blue jeans and other road-ready clothes worn by most everybody else on the plane.”

“The first lady spent quite a bit of time in the cockpit, with pilot Cheryl Beineke, one of just four female C-17 pilots in the U.S. Air Force.”

Today, we hear “So I misspoke,” from Senator Hillary Clinton, in explaining all the discrepencies of her “War Story.” 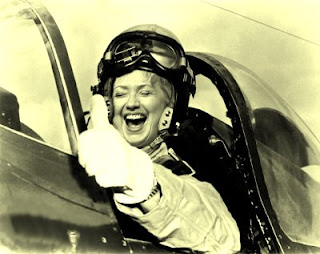 Her stories are as bold as any I have heard from Army Aviators I served with. The only difference is, the helicopter pilots I served with start with, “There I was at 500 feet and the grunts back in the bay were knee deep in hand grenade pins. Then……“